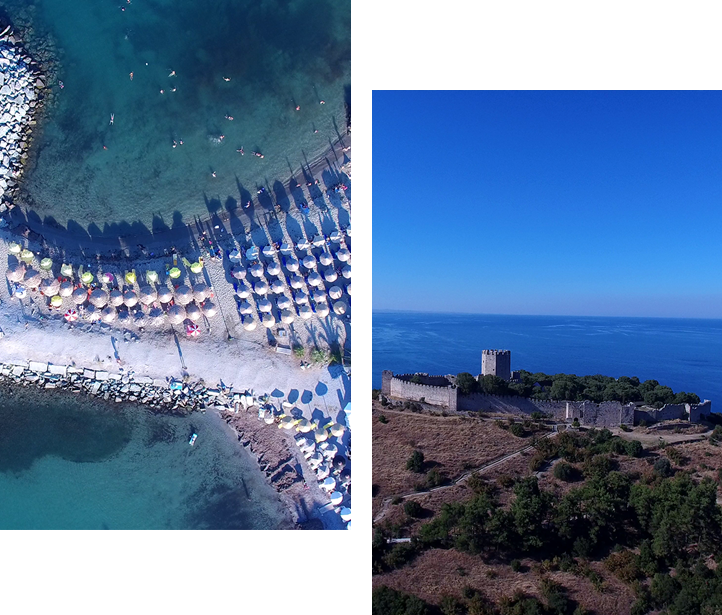 Platamon, also spelled as Platamonas, is a town and sea-side resort in south Pieria prefecture, Central Macedonia, Greece. Platamon has a population of about 1,500 permanent inhabitants. Platamon is regarded as one of the most significant tourist destinations in Pieria. According to tradition its name originates either from the platan trees or from the broad sandy beaches, both of which can be found in the areas surrounding the town. Its most famous landmark is the venetian Castle of Platamon. The town is home to numerous restaurants, cafeterias, hotels and camping resorts while it is 54 km from the city of Larisa and 38 from the city of Katerini. Nearby is the tallest mountain in Greece, the famous Mount Olympus. Platamon is connected to the cities of Katerini and Larissa through the bus and train transportation system. With its calm and laid back atmosphere, high vegetation, panoramic views, the venetian castle and the tradional settlement of Palios Panteleimonas in the area, Platamon makes an ideal destination for a short visit and a break from the city.

During summertime the population reaches approximately 120,000 because of the number of visitors and tourists. A great number of tourists come from eastern countries as well as from local Greek towns such as Larissa and Katerini. The settlement is approximately 7km away from the traditional and scenic settlement of Palios Panteleimonas a popular destination for its stunning panoramic view, graphic restaurants and guest houses. The planned restoration of the old railway line, which is still to be seen running along the seafront, shows imagination and pride in the past.